Vets in Springfield know ticks are becoming an increasingly worrisome problem as average temperatures rise yearly and as white tail deer population increase. The lack of a really cold winter means that ticks do not die off completely as they otherwise would during prolonged freezing temperatures. Ticks are usually in wooded areas or un-kept grassy areas where wildlife live or frequent. Ticks are most active between April and July but this time frame is becoming longer each year.

Ticks will hang out over the edge of grass, leaves or brush and when they sense exhaled carbon dioxide, body odors, vibrations and light changes of passers-by they will extend their front pair of hook-like legs and catch on to their prey. This is called questing.

Tick eggs hatch into 6-legged larvae called seed ticks. After it has its first meal, which is usually a small rodent, it drops off and molts into an 8-legged nymph. It then attaches and feeds from a second host and then drops again and transforms into an 8-legged adult. After that they feed and mate then die. When the female dies thousands of eggs are released into the environment.
Ticks transmit diseases to dogs, cats and humans. They do not discriminate. A tick on your dog is a health threat to your entire family.

The most common ticks in Springfield Missouri.

Description: Newly hatched larvae are yellow, adults are brown and blood engorged females are grey
Vector of: Rocky Mountain Spotted Fever and tularemia (Rabbit fever). Less likely is Lyme disease, Anaplasmosis and Ehrlichia. They can also cause tick paralysis. This is when a neurotoxin transmitted from the tick as it feeds enters the blood stream and can cause muscle weakness and paralysis.

Tick Related Illnesses
If you or a family member or your pet has known tick exposure and you experience any of the following symptoms then call a doctor to seek immediate treatment. Early intervention tickborne illness cases can make a difference in the prognosis. 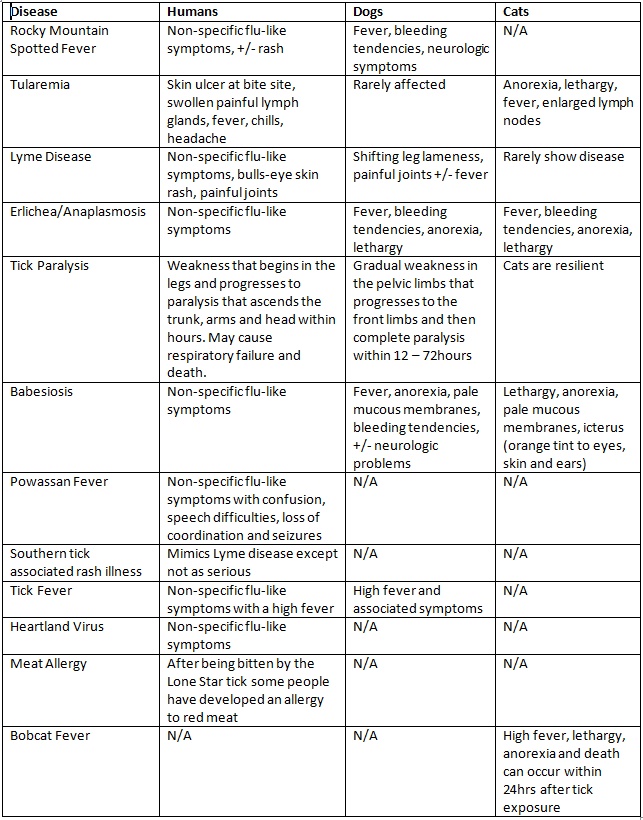