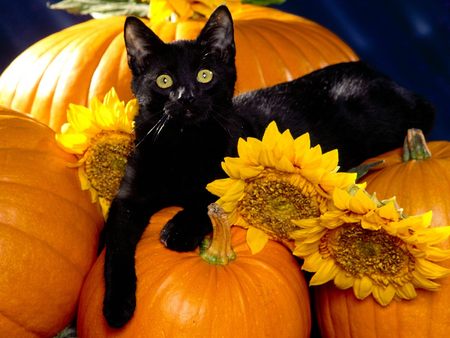 Some people and societies throughout history have simply not appreciated cats.  Black cats are considered unlucky or linked to evil witches.  Other people look at cats as sneaky or as serial killers of defenseless wildlife.  But, if you read some current headlines, you might think that our feline friends are a real serious threat!

The main threat in these news articles is not our cats, but rather, an extremely small protozoan parasite known as Toxoplasma gondii.  The threat occurs because this particular intestinal bug only reproduces in domestic and wild cats.  So, when the sensational headline reads “Study Links Cat Litter Box to Increased Suicide Risk”, many readers frankly scared and soon began to worry about the risks of owning a cat.

So here are the real facts you can count on.  The uproar can be traced back to a pair of scientific articles.  As far back as 2000, scientists have understood that this particular parasite has a peculiar effect on some rodents, actually making rats less fearful of their natural predators, the cats.  More recently, a study of 45,000 women in Denmark concluded that infection with Toxoplasma gondii (Toxo, for short) increased the risk of suicide attempts.  So, it appears that this parasite may alter something in brain chemistries or behavior. But, does that mean our cats are to blame?

The emphatic answer: absolutely not. The key here lies in understanding the life cycle of the parasite, the cat’s role in that life cycle and the simple, easy steps to minimize your potential risk.  All cats, domestic and wild, are a natural host for Toxo.  Our feline friends pick up the parasite from hunting rodents and birds or eating raw meat.  Once in the cat’s intestine, the organism starts reproducing, creating millions of oocytes (essentially eggs) that will pass o into the environment.  Interestingly, cats will shed the parasite for about two or three weeks and then rarely ever pass any more after that. 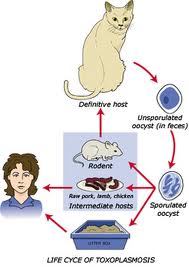 Once outside, these eggs will mature over one to five days and become infective parasites.  It is at this time that any warm blooded animal can become infected by ingesting contaminated soil, water or plant material.  Since most animals aren’t the natural host for Toxo, the parasite localizes in various muscle or nervous tissue and becomes a cyst.  The cycle completes (as most parasite life cycles do) allowing the parasite to once again start to multiply and spread.

For most animals, and people, the parasite is not a problem – remember that.  Some people will experience flu like symptoms but then recover without a problem.  However, immunosuppressed individuals can experience much more severe symptoms, including fevers, confusion, headaches, seizures and poor coordination.  Pregnant woman who have no immunity to Toxo can actually pass the infection to the unborn child causing a miscarriage, stillbirth or serious mental disabilities in the newborn.  So it is true, this parasite is not without it dangers.

The CDC estimates show that about 20% of the US population has antibodies to this parasite.  In addition, the CDC’s website shows that Toxoplasma infections occur by eating undercooked, contaminated meats (especially pork and lamb), accidental ingestion of contaminated meats after handling and failure to wash hands, contamination of foods from utensils used to work with other contaminated foods, drinking water tainted with the parasite and, as mentioned above, accidental ingestion of the parasite through contact with cat feces. 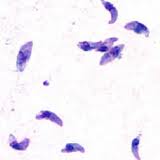 Keeping yourself safe from Toxo is actually pretty easy.  Fully cook all meats, wash your hands and cooking utensils after contact with raw meat or unwashed fruits and vegetables and wear gloves while gardening.   Cat litter boxes should be scooped daily as the parasite does not become infectious for at least 24 hours.  Pregnant women and immunocompromised individuals should completely avoid changing the litter.

Ask your veterinarian about specific recommendations for lowering your risk for toxoplasmosis.  He or she is well schooled in understanding this parasite.