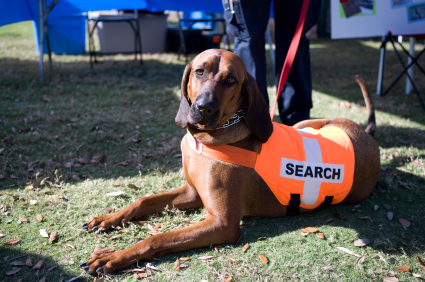 Throughout history, dogs have helped humans in many ways, but it’s only been in the last 350 years or so that our canine friends have assisted in the rescue of lost people.  The most famous example is, of course, the work of hundreds of St. Bernards who are credited with saving more than 2,000 people from frigid deaths high in the Swiss Alps.  Like their historical counterparts, modern day Search and Rescue dogs rely on extensive training, an unshakeable bond with their trainer and, of course, their incredible sense of smell!

We all know that our dogs are great at sniffing out things, especially when food is involved.  Dogs actually have a sense of smell that is about 40 times more sensitive than a human’s and its olfactory prowess that helps make a great search and rescue dog.  Experts still don’t know exactly how dogs can locate an injured person or missing child, but current theories indicate that the dogs are using the dead skin cells that constantly fall off us.  These “skin cell rafts” contain conspicuous human scents that the dogs use during their search. 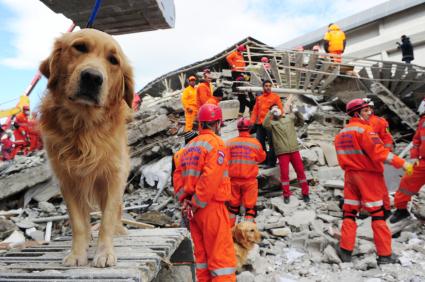 While all breeds possess a keen sense of smell, good search and rescue canines will be a medium to large breed (or mixed breed) animal in good physical health, above average intelligence and also possess good listening skills.  But, perhaps the most important attribute for a good search dog candidate is his desire to play!

Allowing an opportunity for the successful dog to play is the animal’s “reward” for properly performing their duties.  This behavior is ingrained early as training starts with puppies as young as 8-10 weeks of age and is continually reinforced throughout the dog’s career.  The search dog in training is taught to find a special toy with a desired scent and this skill is then expanded so that the dogs learn to find people in all sorts of environments and situations.

Search and rescue dogs are even trained differently, depending on how they will be used.  “Air-scent” dogs work with their nose up in the air, following a scent trail and working towards the highest concentration.  This is especially useful when trying to find victims buried in an avalanche, people trapped under buildings in an urban setting or even human remains.

Contrast this with the typical tracking dogs often seen in movies chasing down escaped criminals.  Bloodhounds and other breeds work with their nose on the ground, following a scent trail from a known starting point.  Many of these dogs also help find children that have wandered away from home and into fields, forests or deserts.  They have even found Alzheimer patients who have strayed from their safe home.

When their services are needed, local law enforcement often calls upon volunteer search and rescue organizations which they have trained with and trust.  These private groups are not components of any branch of government, but are called and deployed to help first responders in a variety of situations.  Although search and rescue dogs have been used throughout the 20th century, the teams have received more national recognition due to their work after 9-11, during the earthquakes in Haiti and Japan and in the aftermath of Hurricanes Katrina, Rita and Ike.

Both handlers and dogs must meet stringent training requirements that are set forth by their organization in addition to specific standards outlined by the Federal Emergency Management Agency (FEMA).  Groups like the American Rescue Dog Association and Search and Rescue Dogs of the United States (SARDUS) have detailed websites about the training their specific groups offer to potential candidates.

So, the next time that your local news shows scenes of devastation or natural disaster, remember that our canine friends, and their human partners, are also on the front lines, saving lives and bringing hope to victims of catastrophes.